No Result
View All Result

Six days after Nigeria crossed 1,000 for the first time on its daily count of COVID-19 infections, the country recorded a similar figure with 1,133 cases confirmed on Wednesday.

This is the second time in close to 10 months that over 1,000 samples will be confirmed positive in a single-day count — the country hit its highest daily figure ever with 1,145 cases recorded on December 17, 2020.

The development comes amid concerns following a new strain of COVID-19 discovered in the UK, and Nigeria’s entry into a second wave of infections.

Although various measures have been rolled out to limit the spread of the virus, the presidential task force (PTF) on COVID-19 says a fresh nationwide lockdown will not come into effect yet, just as deliberations are ongoing to decide on whether to close the airspace to international travellers.

According to the latest update provided by the Nigeria Centre for Disease Control (NCDC) for December 23, 2020, Lagos had the most cases with 397 new infections, followed by FCT with 357, and Kaduna with 81.

Nigeria has now surpassed 80,000 confirmed infections, while the number of active cases has also exceeded 10,000 patients.

Five persons were confirmed to have died of coronavirus complications on Wednesday, increasing the fatality toll to 1,236, while 395 patients were discharged – the new recoveries included 134 patients in Lagos and 96 in the FCT. 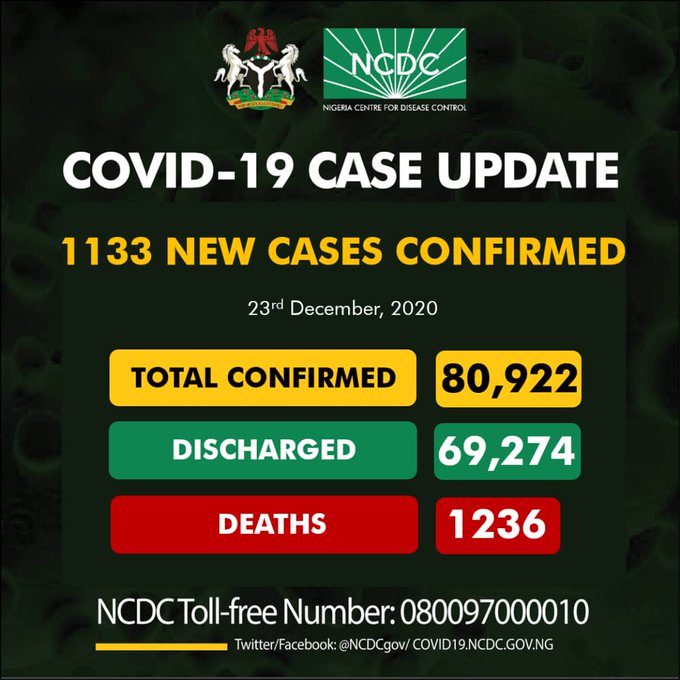 COVID-19 vaccination: Africa in danger of being left behind – WHO

NMA reveals how COVID-19 cases are increasing in Nigeria

COVID-19: Another lockdown looms as Nigeria records over 100,000 cases

Why I want Ahmed Musa in my team – West Brom Coach, Allardyce

Prev Next
No Result
View All Result

Do NOT follow this link or you will be banned from the site!