No Result
View All Result

Leke Adeboye, one of the sons of General Overseer of the Redeemed Christian Church of God, Pastor Enoch Adeboye, has reacted to the death of his brother, Pastor Dare Adeboye.

The Nation earlier reported that Dare, who is the third son of the revered cleric, died in his sleep on Wednesday in Eket, Akwa Ibom State, where he is based with his family.

The 42-year-old who pastored one of the RCCG branches in Abuja was said to have officiated on Sunday and retired to his bed after church, warning that he should not be disturbed during his rest.

According to his wife, Temiloluwa Adeboye, she noticed her husband’s unusual sleeping hours and could not reach him on phone so she reportedly raised an alarm and he was discovered dead.

Leke Adeboye in his reaction on his official instagram page posted a scripture from the bible on the death of the righteous.

He posted, “The righteous man perishes(at the hand of evil), and no one takes it to heart, Faithful and devout men are taken away, while no one understands. That the righteous person is taken away(to be spared) from evil and disaster.

Meanwhile, no official statement has been released by the family as of the time of filing this report. 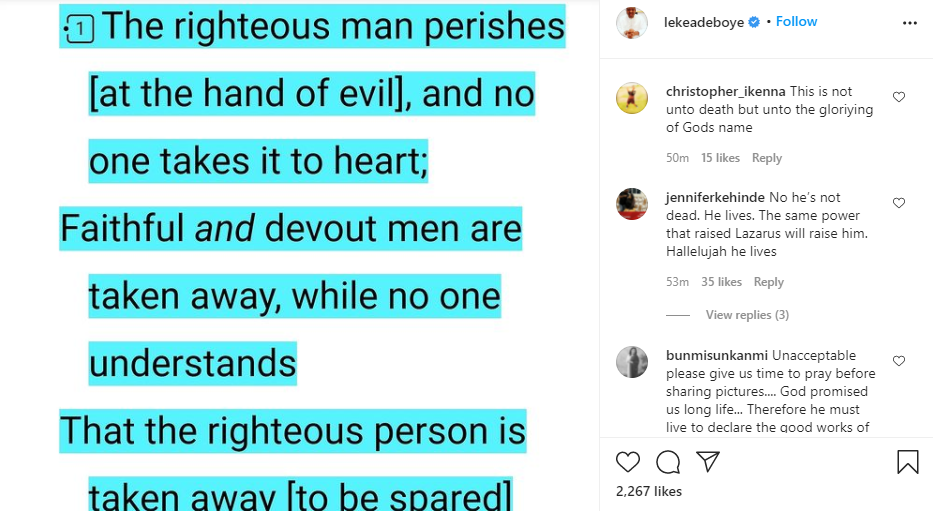 Mr P, Rudeboy should hug it out after Chelsea win, says Ebuka

Prev Next
No Result
View All Result